Breaking News! Practising Nurse At Mbagathi Hospital Has Been Arrested

A practising nurse at Mbagathi Hospital has been arrested and the findings from investigation has shocked the citizens. According to a report from the Directorate of Criminal Investigation, the said practising nurse was found in possession of sixty pellets of heroin. She was arrested.

Other suspects in drug trafficking who were arrested alongside Beatrice are, Caroline Adongo and Risper Auma. The arrest incident took place last night, on Tuesday. They were found in possession of heroin pellets. 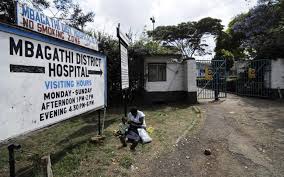 Heroin is one of the most addictive drugs. Drug traffickers have devised mechanisms of shipping the drugs without being detected at the airport. Among the mechanisms is swallowing the drugs.

Beatrice is a resident of the Nasra area in the Kayole neighbourhood. She was busted at her house after the information leaked to the Directorate of Criminal Investigations through their hotline.
Her house was ransacked where the detectives recovered a passport belonging to Awour.

Other passports belonging to the other suspects believed to be her accomplices were also recovered from her house.

Upon thorough inspection, one of the passports was identified to be belonging to a criminal who is being sorted after as the trafficker has a case to answer on drug trafficking in court as revealed by the DCI.

It was during the ransacking process that the officers from the Directorate of Criminal Investigations were able to identify Beatrice Awour as a practising nurse at mbagathi hospital after they found an identification tag bearing the names, job descriptions and other details about the suspect.

In addition, the officers recovered a weighing scale believed to be used to measure the amount of the drug. The scale used for weighing the drug is manufactured from the pods of opium plant seeds.

All the events from the crime scene were captured and documented by the Directorate of Criminal Investigations officer who is currently based in the Kayole area. However, the drugs that were recovered from the crime scene were handed over to the Directorate of Criminal Investigations main office. The drugs were further forwarded to expertise in the anti-narcotics department for forensic analysis.

*4 University Students stabbed to death in their beds*

EALA Nominees Who Have Sailed Through in The Senators Vote