Head Of State Arrested In An Attempted “Coup”

The continent of Africa on spot as one of the head of state within the continent is arrested.

One of the Heads of State within The continents was today arrested by the army in an attempt to overthrow the government. This arrest was reported a few hours after some gunshots were heard within The presidential area according to the reports by local news.

The event for arresting Alpha Conde the president of Guinea took place today Sunday as per the reports from local Media. According to the report it was said that the military wanted to overthrow president Aloha from the government.

Some videos are circulating on media showing the president being arrested by army forces.
One of the newspapers from guinea reported that the head of the special forces was in charge of the attempted coup. 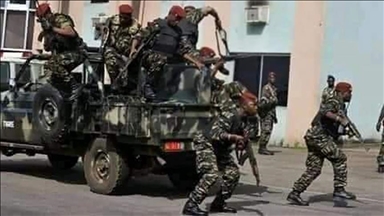 The outgoing president, His Excellency Alpa Conde, entered the statehouse (presidential palace) last year October on his third term as he was re-elected in a general election that brought a lot of violence. Conde is eighty-three years.

The incident occurred a few kilometres from the capital city of Guinea, Conakry. It was later reported by local media. Videos displaying His detention are on social media. There were gunshots in the area.

The situation remains unclear as there are some other contradicting reports. Earlier on government officials issued a statement saying the attack and the attempt to overthrow the government by the military’s special forces was Rebuffed.

Before the attempt, soldiers belonging to special forces were seen as they were driving around the presidential residence at very alarming speed report said. They were also warning the civilians to stay indoors or within their premises.

One of the military team reportedly informed the local reporters about the closing of the entry point from the mainland to the residential area, Kaloum, where the Ministers, President and other Head’s of government reside. Armed troops were deployed to safeguard the entrance, the reporter revealed.

There is only one bridge that joins Kaloum and the mainland. This bridge was guarded to prevent movement in and out of the presidential residence.

The presidential area is approximately fifty kilometres from Coyah city which is near to the capital city of Guinea, Conakry. The area could not be accessed as it was heavily guarded by armed troops from Coyah.