For over 20 years, no one has been in a position to point out specifics reasons why the residents of Laikipia have been living in constant unceasing insecurity thwarting their tranquillity.

Insecurity in the region has geared the residents towards acquisition of guns and other dangerous weapons for self defence against the constant raids.

As the Laikipia Serial Bandit attacks continues, the reasons behind why bandits keep attacking land have been revealed in black and white.

The reason behind Laikipia clashes may not be ethnicity, political intolerance or cultural differences but it has been exposed to be something else.

A reliable sourse has revealed that historical land injustices or/and just climinal activities has been the reason behind the scene of the two decate clashes in the reagion.

The region is claimed to have highly fertily lands attracting large scale farning especially maize plantations. This is something that has always attracted pastoralist tribes torwards admiring the land in the region.

For instance pastoralist usually come to the region peacefully but later start to scare the locals.

The northern part which stands on 88,000 acres of land where the Laikipia Nature Conservancy is situated is always invaded by bandits.

Bandits hide in this area for sometimes before starting attacking the locals.

Yesterday Tuesday the chaos resurfaced Rumuruti town in Laikipia County after farmers clashed with herders. The farmers accused the herders of illegal grazing in Marura area.

Business activities were paralysed in the area after several motorbikes suspected to be owned by the herders were set a blaze. 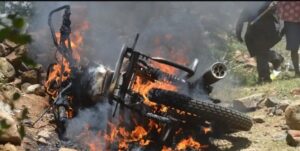 *Students chased away for performing poorly in their exams*