Thousands of trained teachers are yet to be absorbed by TSC while several others have stagnanted in the same job grade for years and they seeking for promotions.

For instance is last year over 300,000 teachers applied only 11,000 teaching slots which were advertised in the July mass recruitment. The This is a clear indication that many trained teachers are desperately seeking for a TSC job.

The number of unemployed teachers is increasing year in year out because TSC has not been able to absorb all trained teachers at once upon graduation.

The looming double transition next year has attracted a lot of concern on the burden teachers will have bearing in mind that most secondary schools in the country are struggling with shortage of teachers.

The Teachers Service Commission is strategising for the coming shortage of teachers. The commission has revealed hat there are plans in place to employ teachers and promote others once it gets funds.

The People Daily has revealed that TSC Chief Executive Officer Dr Macharia said while speaking before MPs yesterday that the commission requires Ksh 10 Billion for staffing. 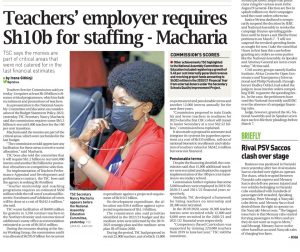 She also said that another Ksh 2 billion people be required for promotion of teachers on competitive basis and the  remaining amount will go to other issues such as appraisals.

Dr Macharia revealed that the areas which require allocation of Ksh 10 billion forms part of the critical areas which last year’s budget did not factor in and hence were not funded.

“Teacher membership a d coaching programme requires appropriately Ksh 50 million while Ksh 342.4 million shall be required to roll out the national biometric enrolment and validation of tutors”, and TSC CEO said.

Criteria to be used to transfer delocalized teachers to their counties

TSC Has Announced Time Frame For Acting on Transfer Requests

*KUPPET Threatens To Stage a Demonstration*