South Africa more vulnerable to flooding as rain resumes in the east: Over 400 people have died and several left homeless

South Africa more vulnerable to flooding as rain resumes in the east: Over 400 people have died and several left homeless.

Rains this week in South Africa have killed nearly 400 people and left thousands homeless, with rains again on the east coast on Saturday, posing a risk of further flooding and leaving many people at community centers and towns.

The displaced people are currently taking refuge in the hall waiting for help from the redcross services.

The rain, which has left at least 40,000 people without shelter, electricity or water, had reduced by Friday but is now expected to continue until early next week.

“I am very worried,” said Gloria Linda, sheltered under a large canopy by a muddy road in her settlement of Kwandengezi, about 30 kilometers (20 miles) inland from Durban’s main eastern coastal city.

This week’s heavy rain in KwaZulu-Natal province shut down power lines, shut down water services and disrupted operations at one of Africa’s busiest ports, Durban, as well as city-bound routes. It has also been reported that several roads were also closed after becoming impassable.

“Many people’s houses have been damaged, many people have died. We have no water, no electricity, even our phones are dead – we are stuck,” said Linda, before walking down a dirt track to the funeral of a friend who was killed by the floods. 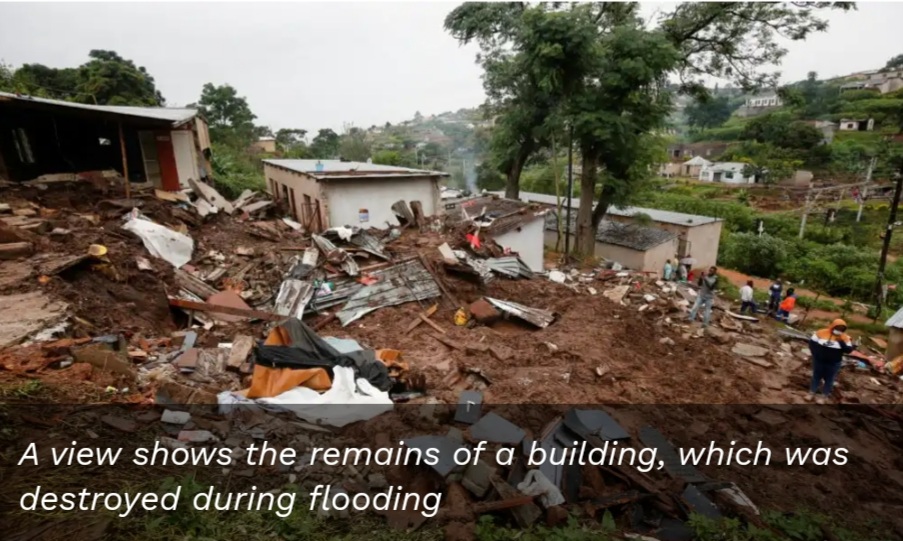 Elsewhere, a family stood in the rain looking at their collapsed metal hut, one of several houses lying in ruins.

State broadcaster SABC said on Saturday that the death toll had now risen to 398, with 27 people still missing. In flood-ravaged places, many relatives were searching only for the bodies of victims to be buried.

“We called the police, we called the ambulance, we called the fire brigade, none of them responded in time,” Muzi Mazob 59, told Reuters in front of a pile of rubble – what from a house The rest which he was giving on rent was the tenants killed in it.

“Four people were buried in the rubble here, and when we pulled them out, they had already passed.”

Well wisbers are now urged to go for the residue of the suffering poor residents whose houses and properties have been devoured by the fierce floods and lend them a helping hand.

South Africa more vulnerable to flooding as rain resumes in the east: Over 400 people have died and several left homeless

From TSC to PSC, principal promoted due to her tremendous performance

*Tenants Forced Out Of a Storey Building After it Developed Cracks*