Professor Stephen Kiama, the University of Nairobi (UoN) Vice-Chancellor is in trouble after he was found guilty of contempt of court for ignoring orders.

The VC is now staring at a possible jail time after defying directives from the Ministry of Education CS professor George Magoha.

On 27th January 2022, the court will be sentencing or handing Stephen Kiama a fine for failing to stop the restructuring process of the senior management at UoN according to the directives which were given by the Ministry of Education CS prof George Magoha.

According to the report, Kiama will face the Employment and Labour Relations Court Judge, Maureen Onyango where he will be sentenced to a six months jail term or a fine.

According to the union’s lawyer Titus Koceyo, the new appointees to the management of the University were already running those offices despite the court suspending implementation of the changes.

UoN Council abolished the old management structure of the institution citing that it was expensive and inefficient. In his move, five offices of deputy vice-chancellors were scrapped and were replaced with two associate vice-chancellors.

UoN vice-chancellor and other leaders were accused of defying court orders that stopped the institution from implementing changes that led to the restructuring of the university.

They were found guilty and in accordance with the law they will be punished for contempt of court by committal to civil jail for a period of not more than six months or as directed by the court or fined Ksh 500,000 each

See also  Wings To Fly Scholarship: How To Apply And Minimum Requirements 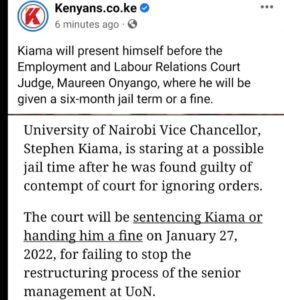